The 2016 Great Lakes Intertribal Food Summit held at Gun Lake Pottawatomi’s Jijak Camp from April 21-24 was a tremendous success due to an amazing turnout of individuals and groups willing to share their unique skills and knowledge.  Search #foodsummit and #jijak for event pictures and posts. 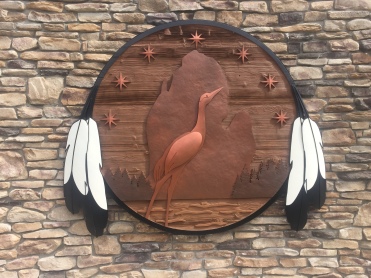 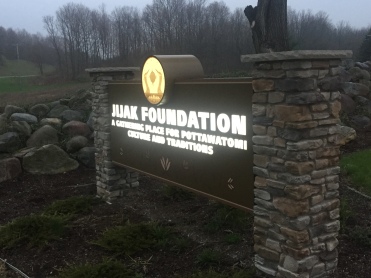 Thirteen workshops covered a diverse variety of topics relating to Tribal food and agriculture on Thursday and Friday, leading to the Intertribal Foods Festival on Saturday.  Notably, the concurrent Native Youth in Food & Agriculture Great Lakes Regional Summit began Thursday evening as Tribal youth from around the Great Lakes region arrived and then spent the next three days learning and expanding their knowledge. 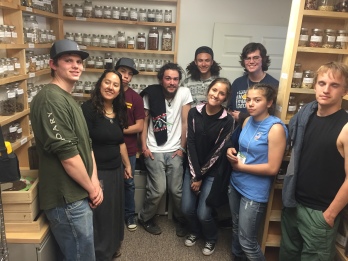 One of the seed saving highlights was Warren Miller, a young man from the Stockbridge-Musee community, who noticed his communities seeds, once grown by his grandmother, in the seed bank collection.  He was able to take home a supply of these to grow this year and rebuild his community’s supply.

Original plans for butchering the bison involved Jijak’s new barn and a truck with a winch to hoist the carcass for processing.  Further reflection on this plan raised several concerns, especially food safety if the temperature was too hot and extended processing time.  Tim Sobie from Sobie Meats provided in-depth assistance in teaching how to make each of the main cuts with audience participation.

Navajo-Churro sheep have been raised by the Navajos for hundreds of years.  The churro’s hardy build have allowed it to survive in harsh environments and its lean meat is health and delicious.  Roy Kady and Eliseo Curley from Navajo traveled to Jijak to teach their traditional methods promoted by their Navajo-Churro Sheep Presidium.

The Sugar House and surrounding mixed maple, walnut, and birch forest provided the perfect setting for learning about sugar production from the conservation, harvesting, and production perspectives.  Profs. Kyle Powys Whyte and John Norder from Michigan State University and Ph.D candidate Carla Dhillon from Michigan provided an overview of climate change and its impacts before the Natural Resources Conservation Service (NRCS) and the Gun Lake Environmental Department addressed conservation and invasive species management.

While the maple harvest ended weeks prior, sap from birch trees was running during the event, offering an opportunity to demonstrate traditional and more modern tapping techniques.  Summit attendees also learned about making granulated sugar, maple vinegar, and other value added products.

Some late spring foraged items like morel mushrooms weren’t yet emerging, but wild leeks and several other plants were abundantly available.  Martin Reinhardt and Daisy Kostus led a foraging trip, and many others made their own foraging expeditions during the event, bringing back food to include in the meals.

Additional Workshops:  Other workshops covered GAP (Good Agricultural Practices) and the Food Safety Modernization Act (FSMA), Community Food Sovereignty Assessments, USDA Financing Opportunities, and Food Hubs.  Videos or short clips of many of these workshops will be posted in the coming weeks.

Finding Indigenous foods at the multitude of events held at conference centers in the nearly $29 billion Tribal casino industry, can be difficult, even on the catering menu.  The lack of a regular dining operation at the Jijak Camp was a slight challenge but provided a major opportunity to bring in our own team and prepare foods in whatever ways we desired.  The end results were amazing! 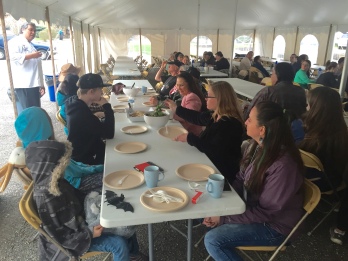 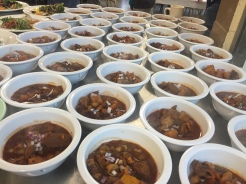 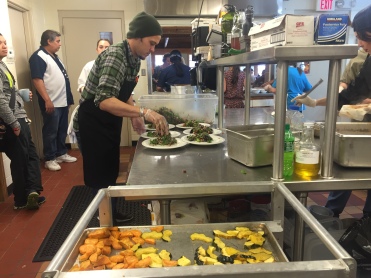 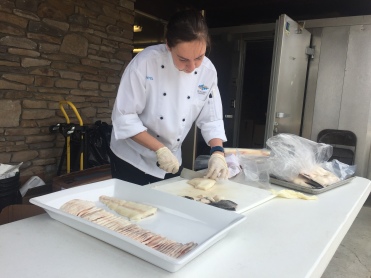 Meals were served buffet, family-style, and on small plates, featuring a wide assortment of Indigenous ingredients.  Onondaga handled Thursday’s lunch before a Red Lake walleye and hand-harvested wild rice dinner that evening.  Friday’s preparations featured a Oaxacan and Mixtec theme led by Neftali Duran and Alberta Salazar.  Saturday opened with an omelette bar from the Gun Lake Casino and then set a new standard with the Intertribal Foods Festival.  We are working to gather recipes from chefs and will be post them over the coming months.

As the chefs were still busy in the kitchen and breakfast was just finishing, cooking fires were lit at the Teaching Pavilion and Sugar House where respective Oneida and Onondaga teams prepared to start their batches of hominy in copper kettles. 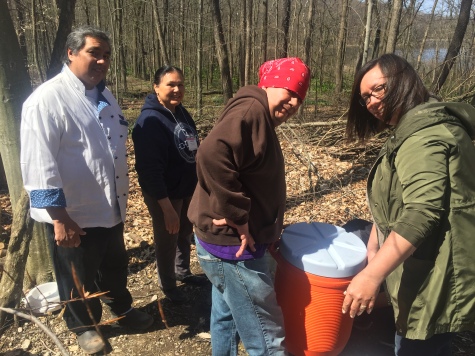 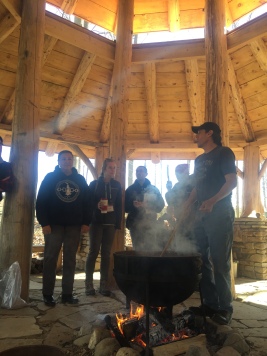 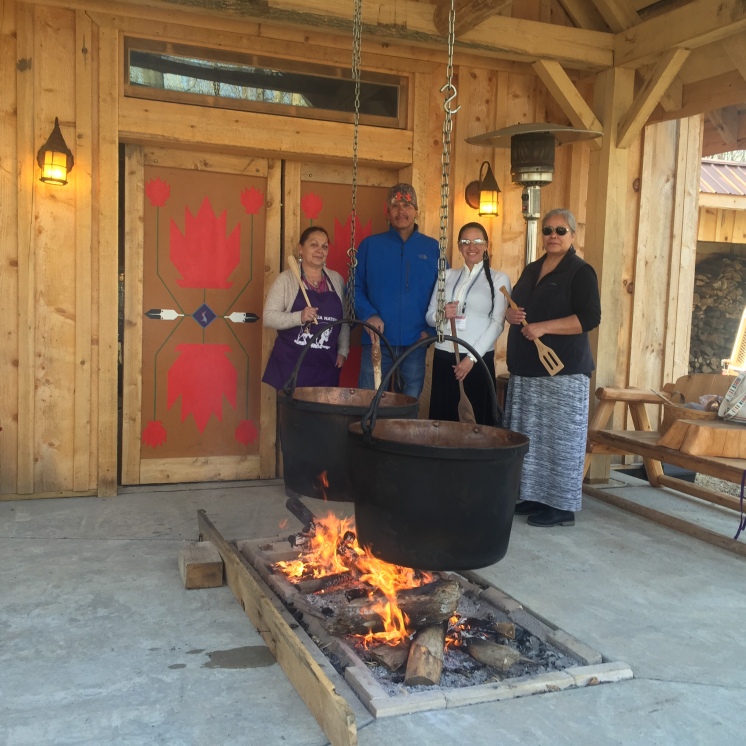 Ancient trade routes criss-crossed Turtle Island long before the advent of modern international “free trade agreements”.  Corn spread from present day Mexico northward along with cacao, and maple sugar went from the Great Lakes south to places like Cahokia.  In an effort to help highlight these ancient and newly re-emerging modern connections,  Julio Saqui, a cacao producer and processor from Belize, joined us to demonstrate cacao preparation while Daisy Kostus from James Bay Cree taught a lesson on beaver processing before it was stuffed and roasted.

As the hominy cooked, cacao flowed, and beaver was processed, chefs in the kitchen prepared to move outside to a series of chef stations.  However, they were first joined by the youth for a quick cooking lesson followed by hands-on experience in preparing small plate meals for roughly 300 people.

Chef stations lining walkway provided the perfect setting for the heart of the Intertribal Foods Festival.  It was difficult not to start with Claudio Serrato‘s wild rice and chia seed pudding topped with walnut cream or Terrie Ami’s roasted white hominy cake with blueberry and sumac sauce. 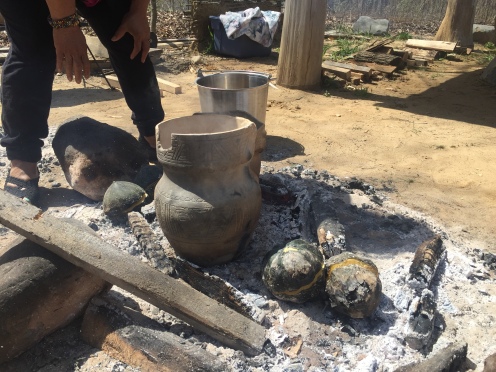 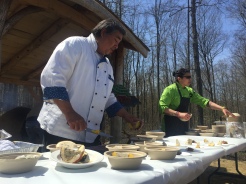 Collaborations are one of the best things about such an event, as highlighted by Loretta Barrett Oden’s tepary beans accompanied by Anna Sigrithur’s pine bark flour flatbread.

Ben Jacobs, co-owner of Tocabe, A Native American Eatery in Denver, is one of the shining new stars of Indigenous cuisine.  His delicious Native Ramen was an interesting fusion of Indigenous ingredients like spaghetti squash (the ramen) and hominy corn with a subtle Asian fusion flavor.

Brian Yazzie is a great example of a young, up-and-coming Native chef who is inspiring with his dishes, and these buffalo meatballs did not disappoint.  Working with the Tatanka Truck and The Sioux Chef, Sean Sherman, in the Twin Cities, Brian is now finishing culinary school while beginning to launch his own food business.

An afternoon of activities followed the incredible small plate lunch.  Many people went to the woods for traditional wild rice processing while others walked across the site to the farm for the rainfall simulator, container planting, and learning about seeds, as well as Jijak’s new 1880s-style post and beam wood barn.

Saturday concluded a drum social preceded by yet another fantastic Indigenous foods dinner. 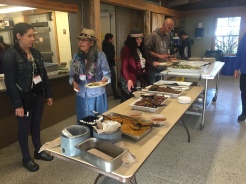 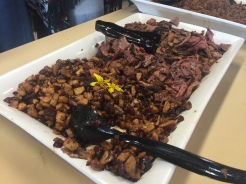 Throughout their experience, the Native youth learned about food-based business planning and many of the technical production aspects.  They then presented a presentation of their business plan to closeout the summit. 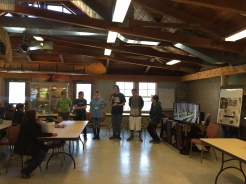 Here is Kevin Finny, former Director of the Jijak Foundation for the Gun Lake Pottawatomi in Michigan speaking about the use of American Basswood, one of several species of trees identified during the fall 2016 Intertribal Food Summit held on the Red Lake Ojibwe Nation during September.

With Kevin Finney, former executive director of the Jijak Foundation and Tashia Hart of the Sioux Chef Team in the woods and fields of Red Lake Ojibwe Reservation foraging for food, fuel and medicines as part of the Great Lakes Intertribal Fall Food Summit during September of 2016.

During the 2016 Intertribal Food Summit the Saturday’s most favorite presentation were the Chefs special Food Festival — where each chef or team had a chance to prepare and serve to participants their special main dish, salad or dessert.

Foraging and Harvesting from the Forest

One of the featured workshop of the Intertribal Food Summit is the Foraging for Food workshops. At the Red Lake Intertribal Food Summit it was called “Harvesting from the Forest” and was be led by Tashia Hart of Red Lake, who works with the Sioux Chef, Sean Sherman. Many other participants assistde in identifying and harvesting for the feasts, plants and medicines that are commonly used by Indigenous people for health and nutrition.

Buddy Raphael and the family Bootagan

Buddy Raphael discusses the family Bootagan that they use to grind rice, corn, barley and other products. The Bootagan, or grinding (smashing) cylinder is made of birch and Buddy worked with several participant to help them build their own. The next video below is also about making a Bootagan.

Participants at the 2017 Great Lakes Intertribal Summit are shown how to make and use a traditional corn, rice, barley mortar for pounding into meal.

Touching base with just one of several Indigenous chefs in attendance at the 2017 Great Lakes Intertribal Food Summit at Gun Lake’s Camp Jijak.

Foraging at Jijak for Food and Salads – 2016

Participants of the 2016 Intertribal Food Summit at the Gun Lake Pottawatomi Tribe’s Camp Jijak forage for food and medicine for the event’s meals, while learning about plants and medicines from the woods.

We are working to gather feedback through this online survey on the Great Lakes Intertribal Food Summit while memories are still fresh.  Please take a few minutes to fill out the survey to let us know what you most enjoyed or would want to see different.  We are also beginning to organize a Great Lakes Intertribal Mini-Food Summit at Red Lake this fall.  More info, including dates will be available shortly.

We’d like to thank all of our generous sponsors.